Here's the pitch - it features three bedrooms (two doubles, the other en-suite), a stylish living space, a carport, separate bathroom and (tantalisingly or nausea-inducingly, depending on your tolerance of sheer drops) an open-air spa and barbecue area on the bottom floor. Artfully minimalist interior décor focuses visitors' attention on "transcendent views of the ocean".

According to the company's website, the plans were drawn up after a couple approached the firm asking its designers to explore how to build a holiday home along "extreme parcels" of coast in Victoria. 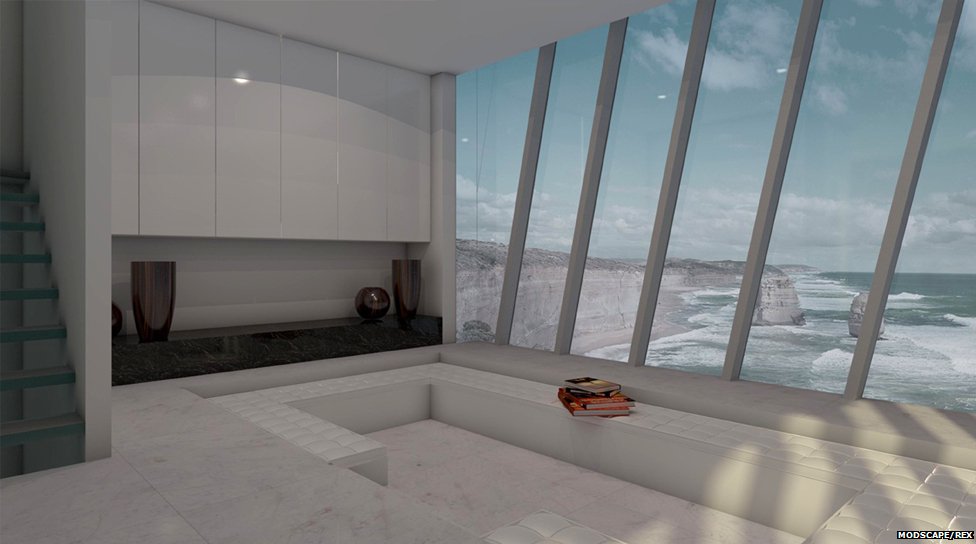 Inspired by the way barnacles cling to a ship's hull, the design envisages that the house would be made up of five modules connected by a lift and secured to the cliff face using engineered steel pins.

It might look precarious - and a hostage to coastal erosion - but there's no reason why the design shouldn't be structurally sound, says Maxwell Hutchinson, a former president of the Royal Institute of British Architects. Cantilever beams drilled into the rock could support the building just as crampons support a climber.

While people assume homes must be built upwards from foundations in the ground, it's equally possibly in theory for them to be suspended or hung, says Hutchinson. There's a tradition of unconventional properties around the world including floating homes, underwater homes and even ice hotels.

But, he warns, "all of these things are expensive because the construction industry hates anything unusual". Any prospective owner of the Cliff House would need very deep pockets.

And that wouldn't be the only thing required of them, Hutchinson says. "It would have to be someone with a very, very strong stomach."